“Financial Technology” of “FinTech” simply refers to the application of technology to create new and improved financial services for consumers and businesses. Most consumers experience FinTech through activities like checking their bank balances online, executing trades through their online brokers or tapping their smartphone against a pay terminal by using services like Apple Pay, Android Pay, etc.

FinTech was the original name of the Financial Services Technology Consortium, a project initiated by Citicorp, a predecessor to today’s Citigroup. This term now represents a hyper growth industry in which global investments (VC and M&A investments) have increased from US $4 billion in 2012 to a staggering US $47 billion in 2015. 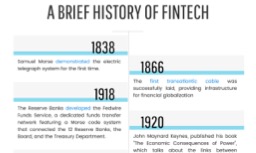 Precursors to the Digital Age of Financial Services (1866 – 1967)
The introduction of telegraph in 1838 and laying of the first transatlantic cable in 1866 provided the fundamental infrastructure necessary for the digital age of financial services. This time period culminated with the introduction of credit cards in 1950, the first handheld financial calculator, and the deployment of the first ATM in 1967.

Digital Age of Financial Services (1967 – 2008)
This time period saw the establishment of automated clearing houses in United States and United Kingdom between 1968-1970. NASDAQ, established in 1971, ushered in electronic securities trading platforms. In 1982, a company named TradePlus kick-started the online brokerage investment revolution and quickly started driving down the cost of online trading. The mainstream emergence of the internet greatly affected financial services. Wells Fargo became the first bank to offer an online checking account in 1995. By the end of this time period, a majority of banks’ internal processes, interactions with outsiders and an ever increasing number of their interactions with retail customers had become fully digitized. In fact, the Financial Services industry spent close to US$560 billion worldwide on IT in 2008.

New Age Financial Services (2008 – present)
The financial crisis of 2008 can be viewed as the turning point for FinTech. Three factors, distrust of banks in the minds of the general public, large pools of highly qualified financial professionals out of jobs and regulatory factors, resulted in the creation of the perfect incubator to allow the FinTech industry to bloom into a hyper-growth market.